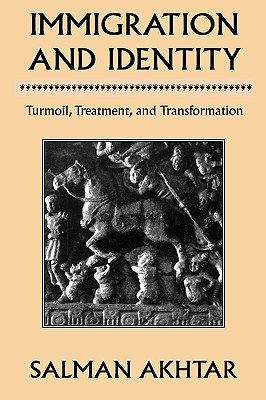 Book Description: Why do people migrate from one country to another? What is the difference between an immigrant and an exile? What determines the psychological outcome of immigration? Can one ever mourn the loss of one's country? What are the defensive functions of nostalgia? Are there specific guidelines for psychotherapy and psychoanalysis for immigrant patients? How can the therapist disentangle the patient's cultural rationalizations from underlying intrapsychic conflicts? In this unique book, psychoanalyst and poet Salman Akhtar provides answers to such questions. He notes that migration from one country to another has lasting effects on an individual's identity. Such identity change involves the dimensions of drives and affects, psychic space, temporality, and social affiliation. Dr. Akhtar addresses the immigrant's idealization and devaluation, closeness and distance, hope and nostalgia, transitional area of the mind, superego change, and linguistic transformation. With poignant clinical vignettes, he illustrates the implications of these ideas for the therapeutic process where the therapist, the patient, or both, are immigrants. Immigration and Identity, replete with poetry and personal letters from immigrant colleagues from many nations, conveys its message with irony, wit, laughter, pain, sadness, empathy, and, above all, clinical and human wisdom.

Book Description: Unlike the wave of immigration that came through Ellis Island and then subsided, immigration to the United States from Mexico has been virtually uninterrupted for one hundred years. In this vividly detailed book, Tomás R. Jiménez takes us into the lives of later-generation descendents of Mexican immigrants, asking for the first time how this constant influx of immigrants from their ethnic homeland has shaped their assimilation. His nuanced investigation of this complex and little-studied phenomenon finds that continuous immigration has resulted in a vibrant ethnicity that later-generation Mexican Americans describe as both costly and beneficial. Replenished Ethnicity sheds new light on America's largest ethnic group, making it must reading for anyone interested in how immigration is changing the United States. 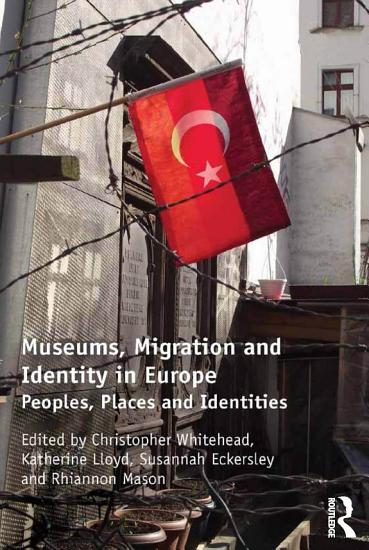 Book Description: The imperatives surrounding museum representations of place have shifted from the late eighteenth century to today. The political significance of place itself has changed and continues to change at all scales, from local, civic, regional to national and supranational. At the same time, changes in population flows, migration patterns and demographic movement now underscore both cultural and political practice, be it in the accommodation of ’diversity’ in cultural and social policy, scholarly explorations of hybridity or in state immigration controls. This book investigates the historical and contemporary relationships between museums, places and identities. It brings together contributions from international scholars, academics, practitioners from museums and public institutions, policymakers, and representatives of associations and migrant communities to explore all these issues. 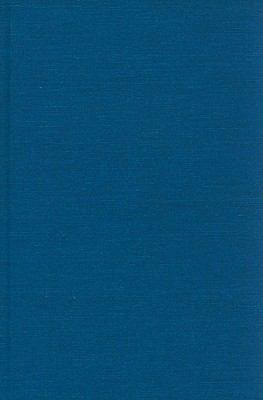 Book Description: "Without a doubt, Tomás Jiménez has written the single most important contemporary academic study on Mexican American assimilation. Clear-headed, crisply written, and free of ideological bias, Replenished Ethnicity is an extraordinary breakthrough in our understanding of the largest immigrant group in the history of the United States. Bravo!"--Gregory Rodriguez, author of Mongrels, Bastards, Orphans, and Vagabonds: Mexican Immigration and the Future of Race in America "Tomás Jiménez's Replenished Ethnicity brilliantly navigates between the two opposing perils in the study of Mexican Americans--pessimistically overracializing them or optimistically overassimilating them. This much-needed and gracefully written book illuminates the on-the-ground situations of the later generations of this key American group, insightfully identifying and analyzing the unique factor operating in its case: more or less continuous immigration for more than a century. Jiménez's work provides a landmark for all future studies of Latin American incorporation into U.S. society."--Richard Alba, author of Remaking the American Mainstream "Tomás Jiménez's study adds a much-needed but long absent element to our understanding of how immigration contributes to the construction and reproduction of Mexican American ethnicity even as it continuously evolves. His work provides useful and needed detail that are absent even from the most reliable surveys."--Rodolfo de la Garza, Columbia University "In a masterful piece of social science, Tomás Jiménez debunks allegations about slow social and cultural assimilation of Mexican Americans through a richly textured ethnographic account of Mexican Americans' lived experiences in two communities with distinct immigration experiences. Population replenishment via immigration, he claims, maintains distinctiveness of established Mexican origin generations via infusion of cultural elixir-in varying doses over time and place. Ironically, it is the vast heterogeneity of Mexican Americans-generational depth, socioeconomic, national origin and legal-that both contributes to the population's ethnic uniqueness and yet defies singular theoretical frameworks. Jiménez's page-turner uses the Mexican American ethnic prism to re-interpret the U.S. ethnic tapestry and revise the canonical view of assimilation. Replenished Ethnicity sets a high bar for second generation scholarship about Mexican Americans."--Marta Tienda, The Office of Population Research at Princeton University

Book Description: "Migration, Identity, and Belonging How do you know when you belong to a country? When is the nation-state a homeland? The boundaries and borders which define who belongs and who does not proliferate in the age of globalization, whether or not they coincide with national jurisdictions. Contributors to this collection engage with how boundaries are made and sustained, examining how belonging is mediated by material relations of power, capital, and circuits of communication technology on the one side and representations of identity, nation, and homeland on the other. The authors' diverse methodologies, ranging from archival research, oral histories, literary criticism, and ethnography attend to these contradictions by studying how the practices of migration and identification, procured and produced through global exchanges of bodies and goods that cross borders, foreclose those borders to (re)produce, and (re)imagine the homeland and its boundaries. This book will appeal to students in classes related to race, ethnicity, and nation; citizenship; representation and aesthetics; media and social movements; and globalization. The book also participates in multidisciplinary conversations concerning law and culture as well as communication studies, cultural studies, ethnic studies, political science, and media studies"-- 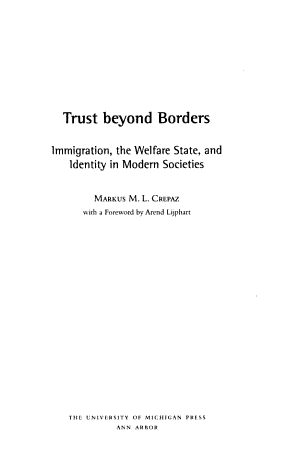 Book Description: Will immigration undermine the welfare state? Trust beyond Borders draws on public opinion data and case studies of Germany, Sweden, and the United States to document the influence of immigration and diversity on trust, reciprocity, and public support for welfare programs. Markus M. L. Crepaz demonstrates that we are, at least in some cases, capable of trusting beyond borders: of expressing faith in our fellow humans and extending help without regard for political classifications. In Europe, the welfare state developed under conditions of relative homogeneity that fostered high levels of trust among citizens, while in America anxiety about immigration and diversity predated the emergence of a social safety net. Looking at our new era of global migration, Crepaz traces the renewed debate about "us" versus "them" on both sides of the Atlantic and asks how it will affect the public commitment to social welfare. Drawing on the literatures on immigration, identity, social trust, and the welfare state, Trust beyond Borders presents a novel analysis of immigration's challenge to the welfare state and a persuasive exploration of the policies that may yet preserve it. "Crepaz contributes much to our knowledge about the link between immigration and social welfare, certainly one of the central issues in current national and international politics." ---Stuart Soroka, Associate Professor of Political Science and William Dawson Scholar, McGill University "Finally! A book that challenges the growing view that ethnic diversity is the enemy of social solidarity. It addresses an issue of intense debate in Western nations; it takes dead aim at the theoretical issues at the center of the controversy; it deploys an impressive array of empirical evidence; and its conclusions represent a powerful corrective to the current drift of opinion. Trust beyond Borders will rank among the very best books in the field." ---Keith Banting, Queen's Research Chair in Public Policy, Queen's University "Do mass immigration and ethnic diversity threaten popular support for the welfare state? Trust beyond Borders answers no. Marshaling an impressive array of comparative opinion data, Crepaz shows that countries with high levels of social trust and universal welfare state arrangements can avoid the development of the welfare chauvinism that typically accompanies diversity." ---Gary Freeman, Professor and Department Chair, Department of Government, University of Texas at Austin Markus M. L. Crepaz is Professor in the Department of International Affairs at the University of Georgia and Associate Director of the Center for the Study of Global Issues (GLOBIS). 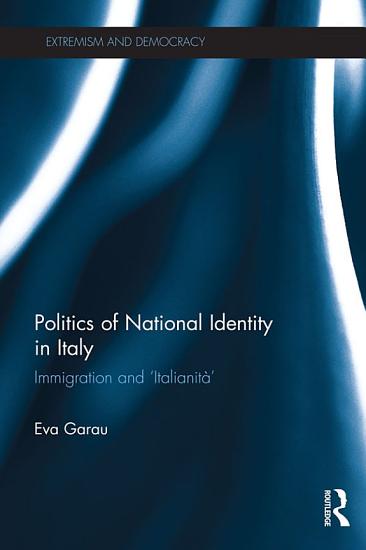 Book Description: This book focuses on the politics of national identity in Italy. Only a unified country for just over 150 years, Italian national identity is perhaps more contingent than longer established nations such as France or the UK. The book investigates when, how and why the discussions about national identity and about immigration became entwined in public discourse within Italy. In particular it looks at the most influential voices in the debate on immigration and identity, namely Italian intellectuals, the Catholic Church, the Northern League and the Left. The methodological approach is based on a systematic discourse analysis of official documents, interviews, statements and speeches by representatives of the political actors involved. In the process, the author demonstrates that a 'normalisation' of intolerance towards foreigners has become institutionalised at the heart of the Italian state. This work will be of particular interest to students of Italian Politics, Nationalism and Comparative Politics. 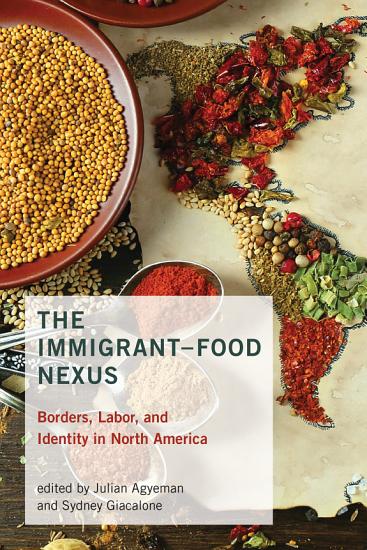 Book Description: "This book investigates the intersection of food and immigration in North America through a novel construct: the immigrant-food nexus. To do this, the book's chapters delve into three overarching areas in which immigration and food intersect from the national level down to the daily lived experience of immigrants: Boundaries: Individuals, Communities, and Nations, Labor: Fields and Bodies, and Identity Narratives and Identity Politics. In taking a critical approach towards questions of food, agricultural and immigration policy, the volume's contributors ask: How can the immigrant-food nexus be understood in our current political climate of rising nationalism, and how does an analysis that transcends traditional "micro" or "macro" scales from the nation to the community to the body provide a new way to think about these issues? The contributors synthesize this analysis of "macro" topics within immigration and food with a "micro" analysis of immigrant foodways. Foodways are manifestations and symbols of cultural histories and proclivities. As individuals participate in culturally defined ways of eating, they perform their own identities and memberships in particular groups. How important are foodways as performances, on immigrant lived and daily practices? The concepts defined as "macro" have real, embodied consequences. The concepts defined as "micro" have large-scale, important meanings. The contributors recognize this: their work bridges the scales of the nation, community, and individual bodies to "render visible the political tensions about race, agriculture, immigration, and the future of the nation that simmer in everyday life" (Neubert, Chapter 2). Through critical, multidimensional research, critical food and immigration scholars today find themselves at a generative place to bring fact-based, humanized, and multi-scalar narratives of the immigrant-food nexus to light. The uniqueness of this book lies in the concept of the immigrant-food nexus as a lens for exploring immigration and food in North America. This fulfills a special need: to complicate the binary of macro level policy, and micro level lived experience, showing the intersections between these scales"--