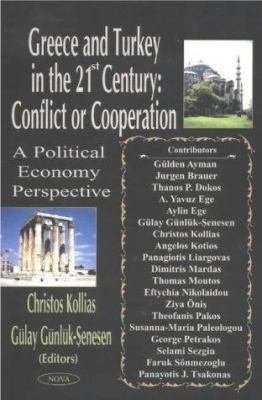 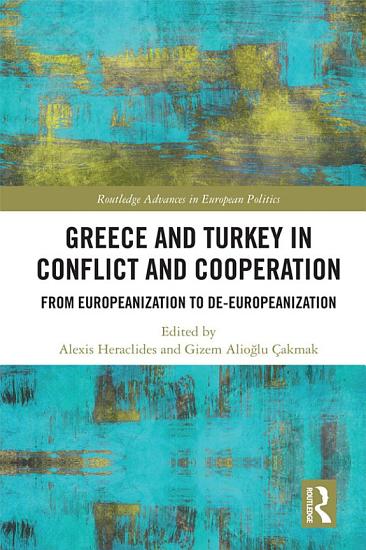 Book Description: This book offers a sober, contemplative and comprehensive coverage of Greek–Turkish relations, covering in depth the current political climate, with due regard to the historical dimension. The book includes up-to-date accounts of the traditional areas of unresolved discord (Aegean, minorities, Cyprus, the Patriarchate), with emphasis on why they remain contentious, despite the thaw in Greek–Turkish relations from 1999 until recently. It also covers new topics and challenges that have led to cooperation as well as friction, such as unprecedented economic cooperation, energy resources, or the refugee crisis. Furthermore, the volume deals with the ‘Europeanization’ of Greek–Turkish relations and other facilitating factors as they appeared in the first decade of the 21st century (including the role of civil society) as well as the contrary, ‘de-Europeanization’ from the 2010 onwards, which presages a hazardous downward trend in their relations, often not helped by the media in both countries, which is also examined. This volume will be essential reading to scholars and students of Greek–Turkish relations, more generally Greece and Turkey, and more broadly to the study of South European Politics, European Union politics, security studies and International Relations. 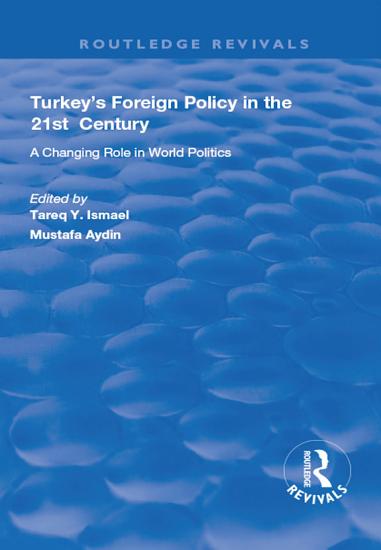 Book Description: Title first published in 2003. In this insightful book, the authors explore Turkey's role within a globalizing world and, as a new century unfolds, examine a nation at the crossroads of both time and space within the international political order. Chapters consider Turkey's policy history, its prospects and policy issues and discuss them with positive alternatives outlined for Turkish policy-makers and the academics who examine them. 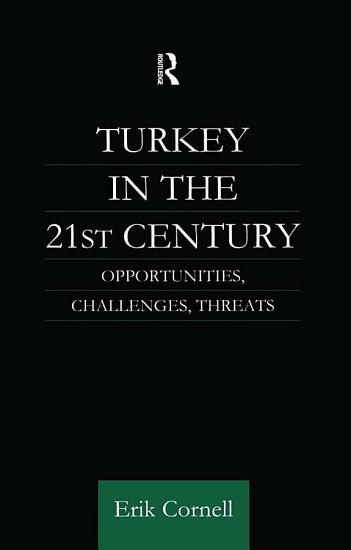 Book Description: Answers the questions: what is the background to issues in external and internal politics? What is the Turks' opinion on European and Turkish identity? On Cyprus? On the role of the generals? Why do human rights problems linger on? What is behind the Kurdish question? Is Turkey religiously split? What are the pros and cons of Turkish association with the EU? 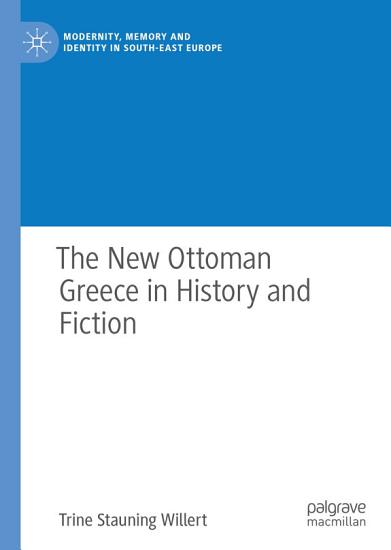 Book Description: This book explores the increasing interest in the Ottoman past in contemporary Greek society and its cultural sphere. It considers how the changing geo-political balances in South-East Europe since 1989 have offered Greek society an occasion to re-examine the transition from cultural diversity in the imperial context, to efforts to homogenize culture in the subsequent national contexts. This study shows how contemporary immigration and better relations with Turkey led to new directions in historiography, fiction and popular culture in the beginning of the twenty-first century. It focuses on how narratives about cultural co-existence under Ottoman rule are used as a prism of national self-awareness and argues that the interpretations of Greece’s Ottoman legacy are part of the cultural battles over national identity and belonging. The book examines these narratives within the context of tension between East and West and, not least, Greece’s place in Europe. 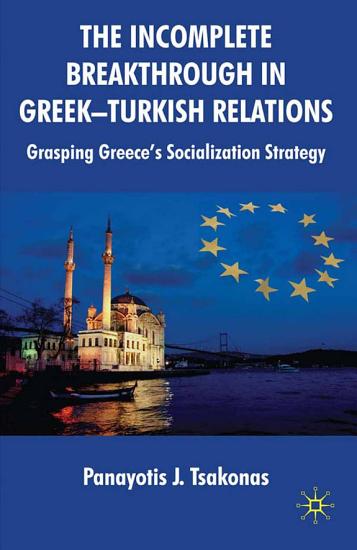 Book Description: This methodical analysis of Greece's strategy towards Turkey highlights important new findings about the role particular elements of a state's strategic culture play in explaining major and/or minor shifts in strategy. The book breaks new ground in exploring when and how states develop socialization strategies. 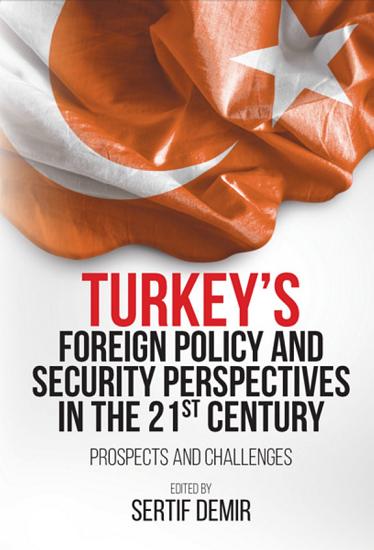 Book Description: This books aims at analyzing Turkish foreign and security policies in the 21st century. Turkey’s foreign and security policies have become the focus of academic discussions since Turkey is located in the middle of the most unstable region in the world. Turkey’s self-assured foreign policy has similarly attracted the attention of academicians worldwide. Meanwhile, Turkey’s security policy has also been the subject of discussions as the country has been struggling with ethnic terrorism for 35 years. Furthermore, the US invasion of Iraq and the recent Syrian civil war, along with other factors, have caused religious radicalism to expand its power throughout the Middle East, which has heavily impacted on Turkey’s security. Turkey’s longstanding problems with its neighbors have also affected the general characteristics of its foreign policy, particularly leading to its securitization. 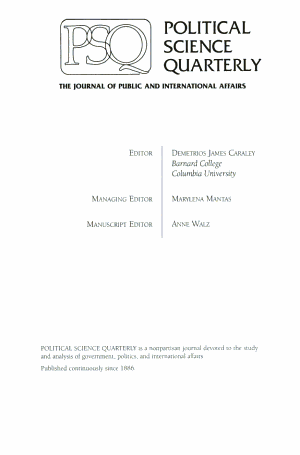 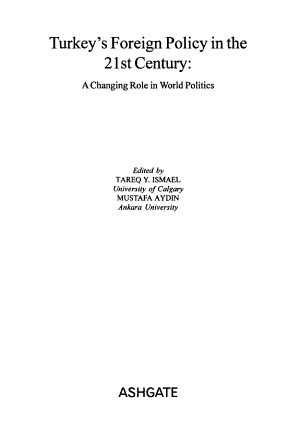 Book Description: The organization of this study reflects the authors' efforts to situate events in the context of a theoretical analysis of Turkey's foreign policy, as well as its relationship with the West and with its regional neighbours. 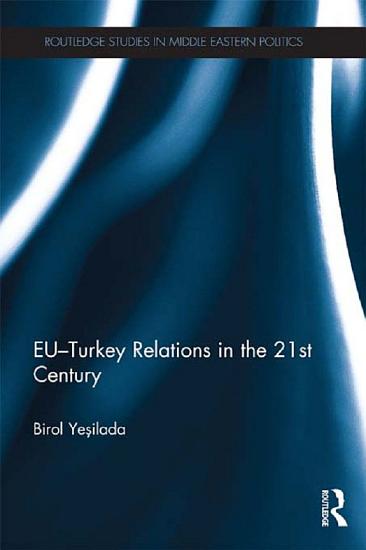 Book Description: The possibility of Turkey’s accession to the European Union has been problematic. Initially, the EU’s pursuit of regional economic integration and enlargement of membership, at the exclusion of Turkey, strained relations between the two. It was not until 1999, and under pressure from the US, that Turkey was considered as a potential candidate for membership. This book seeks to provide a comprehensive assessment of the fluctuating relations between the EU and Turkey in the twenty-first century. Applying complementary theoretical models to evaluate prospects for Turkey’s membership, analysis includes; Turkey’s report card on the Copenhagen criteria, public opinion in Europe and Turkey, and benefits and challenges based on projection estimates. The results show that whilst both sides stand to make significant gains from Turkey’s membership, the current state of affairs point in the direction of a failure. Examining complex issues surrounding EU-Turkey relations and addressing the critical question of what will happen if Turkey is rejected by the EU, this book will be of interest to students and scholars of politics, Turkey and the wider Middle East.