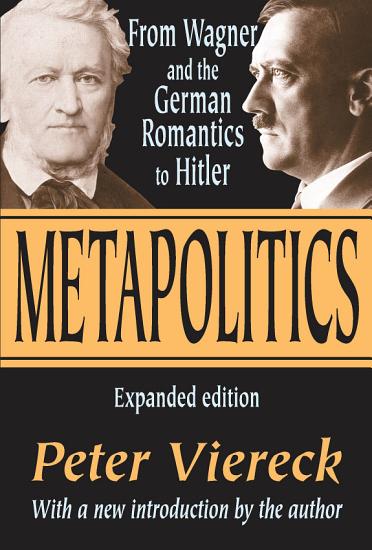 Book Description: More than half a century after the fall of the Third Reich, Nazism, its roots and its essential nature, remain a central and unresolved enigma of the twentieth century. During the period of Hitler's ascendancy, most attempts at explaining this unprecedented phenomenon were framed in "economic," often Marxist, sociological terms and concepts. Peter Viereck's Metapolitics, initially published in 1941, broke with this convention by indicting Hitler in terms of the Judaic-Christian ethical tradition and locating certain elements of the Nazi worldview in German romantic poetry, music, and social thought. Newly expanded, Metapolitics remains a key work in the cultural interpretation of Nazism and totalitarianism and in the psychological interpretation of Hitler as a Wagnerite and failed artist. The term "metapolitics," a coinage from Richard Wagner's nationalist circle, signifies an ideology resulting from five distinct strands: romanticism (embodied chiefly in the Wagnerian ethos), the pseudo-science of race, Fuehrer worship, vague economic socialism, and the alleged supernatural and unconscious force of the Volk collectivity. Together, those elements engendered an emphasis on irrationalism and hysteria and belief in a special German mission to direct the course of the world's history. Viereck analyzes nineteenth-century German thought's conflicting attitudes toward political procedures and social arrangements rooted in classical, rational, legalistic, and Christian traditions. This edition includes an appreciation by Thomas Mann and an exchange with Jacques Barzun debating Viereck's criticism of German romanticism. Viereck's essays on the case of Albert Speer, on Claus von Stauffenberg (the German officer who led the army conspiracy to assassinate Hitler), and on the poets Stefan George and Georg Heym appear here for the first time in book form.