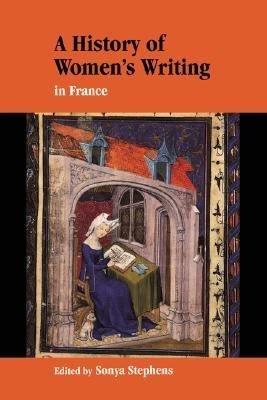 
This volume was the first historical introduction to women's writing in France from the sixth century to the present day. Specially-commissioned essays by leading scholars provide an introduction in English to the wealth and diversity of French women writers, offering fascinating readings and perspectives. The volume as a whole offers a cohesive history of women's writing which has sometimes been obscured by the canonisation of a small feminine elite. Each chapter focuses on a given period and a range of writers, taking account of prevailing sexual ideologies and women's activities in, or their relation to, the social, political, economic and cultural surroundings. Complemented by an extensive bibliography of primary and secondary works and a biographical guide to more than one hundred and fifty women writers, it represents an invaluable resource for those wishing to discover or extend their knowledge of French literature written by women. 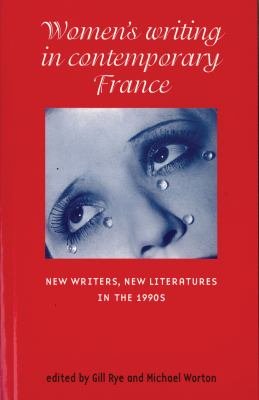 
This book provides an up-to-date introduction to and analysis of new women's writing in contemporary France including both new writers of the 1990s and their more established counterparts. 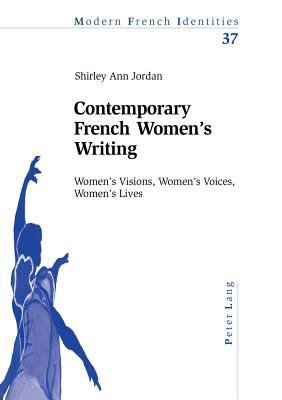 
In the 1990s the French literary arena was enlivened by the emergence of a new generation of women writers. This book selects six of its most distinctive voices and addresses important questions about the very new in French women's writing. What are young women choosing to write about? What do they tell us about changing perceptions of feminine identities? What does it mean to write (and to read) as women at the start of the new millennium? An introductory chapter explores key issues such as the woman writer in the public imagination and continuity and change within French women's writing since the 1970s. It also highlights thematic threads which recur across the work of the authors studied: history and time, wandering and exile, self and other, the body and sexuality and writing and telling. The remaining chapters propose productive approaches to the fictional worlds of Marie Darrieussecq, Virginie Despentes, Marie Ndiaye, Agnès Desarthe, Lorette Nobécourt and Amélie Nothomb through close readings of their most challenging, popular or telling texts. They focus on perennial preoccupations in women's writing which are given new treatment by these writers and discuss important developments such as uses of the pornographic, myth and fairy tale and parody and irony in new women's writing. 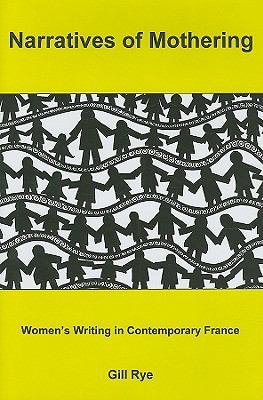 
Narratives of Mothering: Women's Writing in Contemporary France engages with an important new trend in contemporary women-authored literature, namely, a turn to narratives of mothering from the perspective of mothers themselves. Although there have been some instances of this in the past, mothers in French literature have, on the whole, tended to be objects of others' discourses rather than narrative subjects in their own right. However, since the beginning of the 1990s, mothers' own voices have come to the fore in a new body of literature, comprising authors such as Christine Angot, Genevieve Brisac, Marie Darrieussecq, Camille Laurens, and Marie Ndiaye, among many others.


A wide range of French women writers are surveyed, including Sand, Colette, Beauvoir and Duras among the canonized, and many marginalized or forgotten and contemporary names not yet widely known outside France. These writers are seen within the political, economic and cultural context of women's lives and how these have changed across a century-and-a-half. Underpinning the whole account is the relationship between gender and language, between politics sexual and textual. 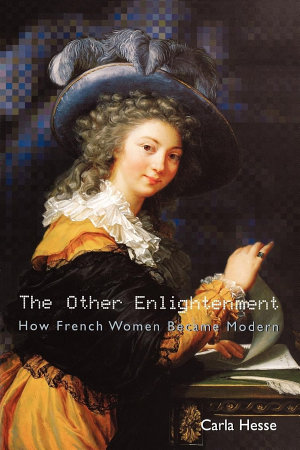 
The French Revolution created a new cultural world that freed women from the constraints of corporate privilege, aristocratic salons, and patriarchal censorship, even though it failed to grant them legal equality. Women burst into print in unprecedented numbers and became active participants in the great political, ethical, and aesthetic debates that gave birth to our understanding of the individual as a self-creating, self-determining agent. Carla Hesse tells this story, delivering a capacious history of how French women have used writing to create themselves as modern individuals. Beginning with the marketplace fishwives and salon hostesses whose eloquence shaped French culture low and high and leading us through the accomplishments of Simone de Beauvoir, Hesse shows what it meant to make an independent intellectual life as a woman in France. She offers exquisitely constructed portraits of the work and mental lives of many fascinating women--including both well-known novelists and now-obscure pamphleteers--who put pen to paper during and after the Revolution. We learn how they negotiated control over their work and authorial identity--whether choosing pseudonyms like Georges Sand or forsaking profits to sign their own names. We encounter the extraordinary Louise de Kéralio-Robert, a critically admired historian who re-created herself as a revolutionary novelist. We meet aristocratic women whose literary criticism subjected them to slander as well as writers whose rhetoric cost them not only reputation but marriage, citizenship, and even their heads. Crucially, their stories reveal how the unequal terms on which women entered the modern era shaped how they wrote and thought. Though women writers and thinkers championed the full range of political and social positions--from royalist to Jacobin, from ultraconservative to fully feminist--they shared common moral perspectives and representational strategies. Unlike the Enlightenment of their male peers, theirs was more skeptical than idealist, more situationalist than universalist. And this alternative project lies at the very heart of modern French letters.


An accessible introduction to French feminist theory and contemporary French women's writing for non-French speakers. The book offers a context to this challenging, controversial body of work by giving clear accounts of the philosophical, post-structural and psychoanalytic debates which have had such an impact on French intellectual life in recent years, and to which French feminist writers offer a response. 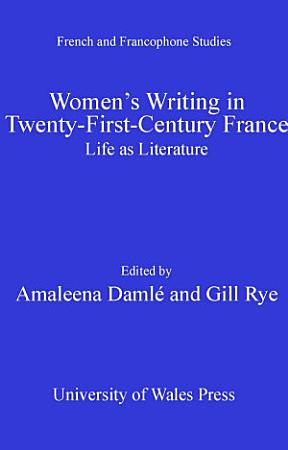 
Women’s Writing in Twenty-First Century France is a collection of critical essays on recent women-authored literature in France. It takes stock of the themes, issues and trends in women’s writing of the first decade of the twenty-first century, and it engages critically with the work of individual authors through close textual readings. Authors covered include major prizewinners, best-selling authors, established and new writers whose work attracts scholarly attention, including those whose texts have been translated into English such as Christine Angot, Nina Bouraoui, Marie Darrieussecq as Chloé Delaume, Claudie Gallay and Anna Gavalda. Themes include translation, popular fiction, society, history, war, family relations, violence, trauma, the body, racial identity, sexual identity, feminism, life-writing and textual/aesthetic experiments. 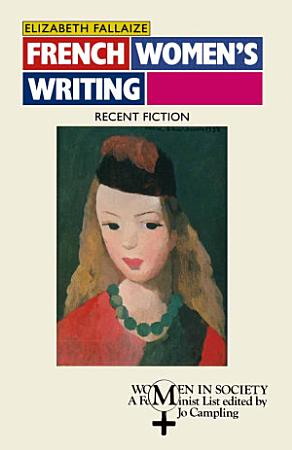 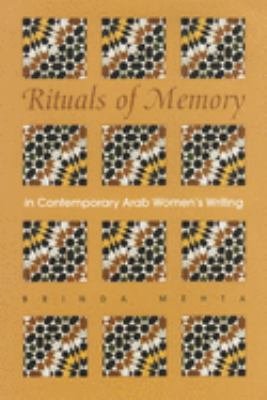 
This volume carefully assesses fixed notions of Arab womanhood by exploring the complexities of Arab women’s lives as portrayed in literature. Encompassing women writers and critics from Arab, French, and English traditions, it forges a transnational Arab feminist consciousness. Brinda Mehta examines the significance of memory rituals in women’s writings, such as the importance of water and purification rites in Islam and how these play out in the women’s space of the hammam (Turkish bath). Mehta shows how sensory experiences connect Arab women to their past. Specific chapters raise awareness of the experiences of Palestinian women in exile and under occupation, Bedouin and desert rituals, and women’s views on conflict in Iraq and Lebanon, and the compatibility between Islam and feminism. At once provocative and enlightening, this work is a groundbreaking addition to the timely field of modern Arab women’s writing and criticism and Arab literary studies. 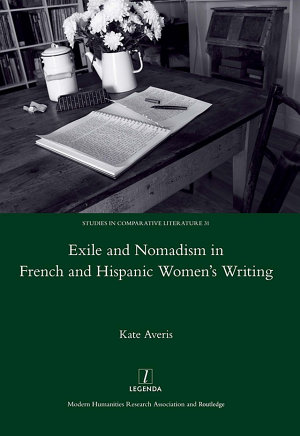 
Women in exile disrupt assumptions about exile, belonging, home and identity. For many women exiles, home represents less a place of belonging and more a point of departure, and exile becomes a creative site of becoming, rather than an unsettling state of errancy. Exile may be a propitious circumstance for women to renegotiate identities far from the strictures of home, appropriating a new freedom in mobility. Through a feminist politics of place, displacement and subjectivity, this comparative study analyses the novels of key contemporary Francophone and Latin American writers Nancy Huston, Linda Le, Malika Mokeddem, Cristina Peri Rossi, Laura Restrepo, and Cristina Siscar to identify a new nomadic subjectivity in the lives and works of transnational women today. 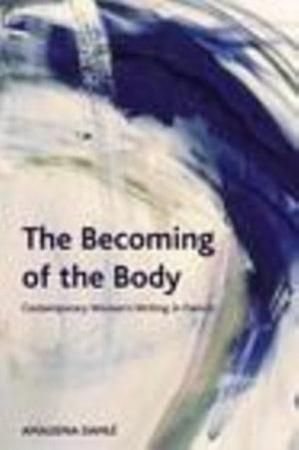 
Following a long tradition of objectification, 20th-century French feminism often sought to liberate the female body from the confines of patriarchal logos and to inscribe its rhythms in writing. Amaleena Damle addresses questions of bodies, boundaries and philosophical discourses by exploring the intersections between a range of contemporary philosophers and authors on the subject of contemporary female corporeality and transformation. 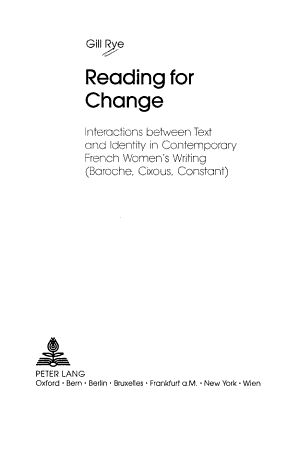 
How does reading literature change our life? How does it change the way we see each other? In what ways can reading impact on who we are and what we will become? Drawing creatively on major theorists from French and Anglo-American feminisms through psychoanalysis, sociology and psychology to contemporary literary theory, the author articulates reading as a process of change. Relations between text and reader, individual and collective identities, self and other, are thought through in a sustained development of a politics of reading based on the model of the dialogue. Without losing sight of diversity and subjectivity in reading, this book explores the transformative potential of literature through themes of loss, maternity and difference in original readings of some post-1980 French fiction. Anglophone readers are introduced to the rich oeuvre of Christiane Baroche and to the accessible yet thought-provoking novels of Paule Constant (winner of the 1998 prix Goncourt) as well as to new critical analyses of Hélène Cixous's later fictions.