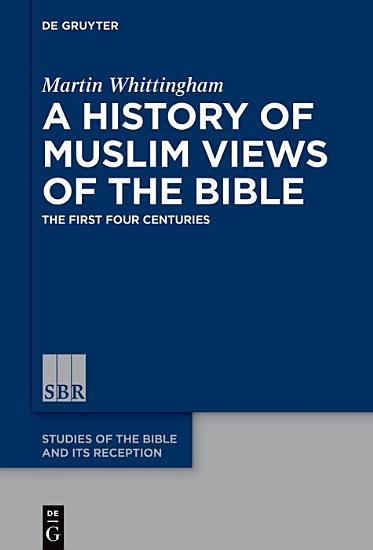 Book Description: This book is the first of two volumes that aim to produce something not previously attempted: a synthetic history of Muslim responses to the Bible, stretching from the rise of Islam to the present day. It combines scholarship with a genuine narrative, so as to tell the story of Muslim engagement with the Bible. Covering Sunnī, Imāmī Shī'ī and Ismā'īlī perspectives, this study will offer a scholarly overview of three areas of Muslim response, namely ideas of corruption, use of the Biblical text, and abrogation of the text. For each period of history, the important figures and dominant trends, along with exceptions, are identified. The interplay between using and criticising the Bible is explored, as well as how the respective emphasis on these two approaches rises and falls in different periods and locations. The study critically engages with existing scholarship, scrutinizing received views on the subject, and shedding light on an important area of interfaith concern. 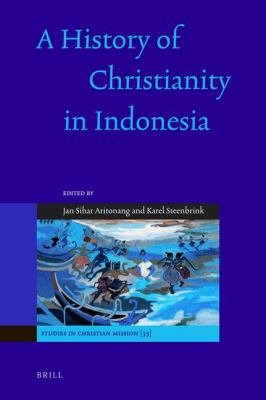 Book Description: Indonesia is the home of the largest single Muslim community of the world. Its Christian community, about 10% of the population, has until now received no overall description in English. Through cooperation of 26 Indonesian and European scholars, Protestants and Catholics, a broad and balanced picture is given of its 24 million Christians. This book sketches the growth of Christianity during the Portuguese period (1511-1605), it presents a fair account of developments under the Dutch colonial administration (1605-1942) and is more elaborate for the period of the Indonesian Republic (since 1945). It emphasizes the regional differences in this huge country, because most Christians live outside the main island of Java. Muslim-Christian relations, as well as the tensions between foreign missionaries and local theology, receive special attention. 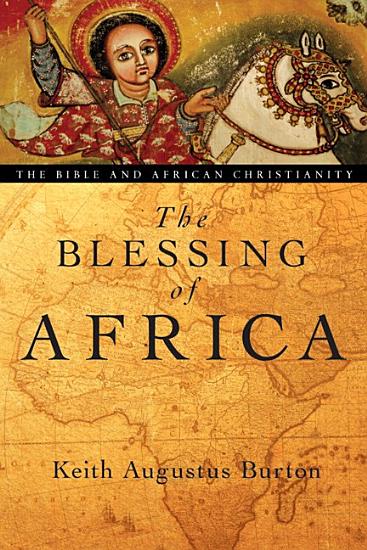 Book Description: Keith A. Burton traces the story of biblical Africa and the place of the Bible in the land of Ham. He ends with an examination of the modern era and the achievements of African Christianity. This invigorating work places the story of the Bible and African Christianity in a wider global context and challenges readers to think differently about history and the biblical world. 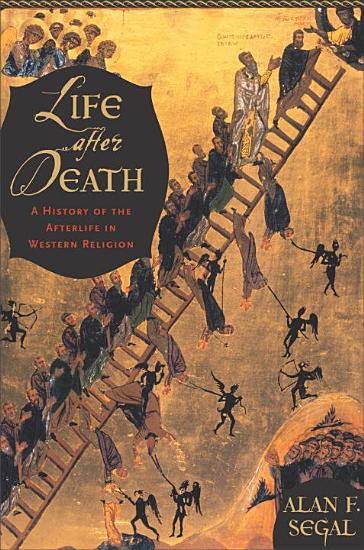 Book Description: A magisterial work of social history, Life After Death illuminates the many different ways ancient civilizations grappled with the question of what exactly happens to us after we die. In a masterful exploration of how Western civilizations have defined the afterlife, Alan F. Segal weaves together biblical and literary scholarship, sociology, history, and philosophy. A renowned scholar, Segal examines the maps of the afterlife found in Western religious texts and reveals not only what various cultures believed but how their notions reflected their societies’ realities and ideals, and why those beliefs changed over time. He maintains that the afterlife is the mirror in which a society arranges its concept of the self. The composition process for Judaism, Christianity, and Islam begins in grief and ends in the victory of the self over death. Arguing that in every religious tradition the afterlife represents the ultimate reward for the good, Segal combines historical and anthropological data with insights gleaned from religious and philosophical writings to explain the following mysteries: why the Egyptians insisted on an afterlife in heaven, while the body was embalmed in a tomb on earth; why the Babylonians viewed the dead as living in underground prisons; why the Hebrews remained silent about life after death during the period of the First Temple, yet embraced it in the Second Temple period (534 B.C.E. –70 C.E.); and why Christianity placed the afterlife in the center of its belief system. He discusses the inner dialogues and arguments within Judaism and Christianity, showing the underlying dynamic behind them, as well as the ideas that mark the differences between the two religions. In a thoughtful examination of the influence of biblical views of heaven and martyrdom on Islamic beliefs, he offers a fascinating perspective on the current troubling rise of Islamic fundamentalism. In tracing the organic, historical relationships between sacred texts and communities of belief and comparing the visions of life after death that have emerged throughout history, Segal sheds a bright, revealing light on the intimate connections between notions of the afterlife, the societies that produced them, and the individual’s search for the ultimate meaning of life on earth. 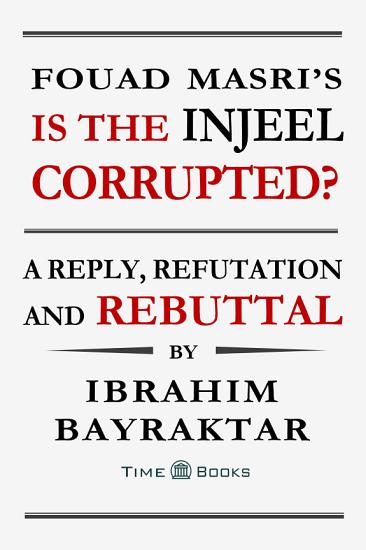 Book Description: In Is the Injeel Corrupted? (Crescent Project, 2006; Book Villages, 2012), Fouad Masri searches for the truth about the New Testament by tackling the question of whether the present-day Injeel (the Gospel) can be trusted, and whether Muslims should read and follow its teachings. Masri further examines the claim that the Bible is both corrupted and unreliable as a source of theological truth about Allah, His will, and the Prophets. Relying on quotes from the Qur’an, the Bible, and history, Masri concludes that the Bible is true, reliable, and free from corruption. The error thus lies not in the Christian scriptures themselves, but in the Muslim view that the Bible is corrupted. Masri’s argumentation is flawed, however, in that it is based on superficial reasoning that only scratches the surface of Islamic theology on the question of the authenticity of the Christian scriptures. He reaches his conclusions by distorting the meaning of Islamic scripture and calling on readers’ emotions to draw them towards a Christian worldview, with arguments that do not hold up to the scrutiny of tight logic. While the book successfully draws readers to sympathize with Christian thought and theology, it ultimately fails to address Muslim concerns from an intellectual perspective. 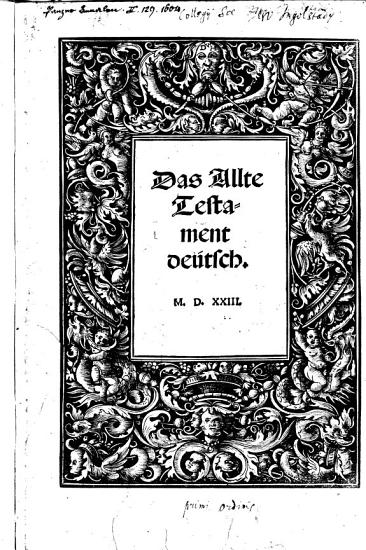 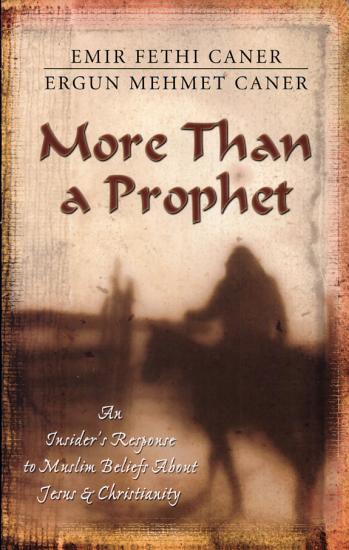 Book Description: For the world's one billion Muslims, Jesus is a prophet. A highly respected prophet, but one of many throughout history. For Christians, Jesus is more than a prophet. He alone is God incarnate, Lord and Savior. And therein lies the most profound difference between the two faiths. Based upon the authors' extensive dialogues and debates with skeptical, angry, and interested Muslims, liberal Christians, and mainstream journalists, More Than a Prophet answers nearly 150 questions about Islamic and Christian faith. Sympathetic to Muslim concerns yet uncompromising in its portrayal of historic Christian truth, More Than a Prophet is an indispensable handbook for Christians who want to share their faith with sensitivity and intellectual honesty. It is also a helpful introductory resource for those seeking to understand Jesus. - Back cover. 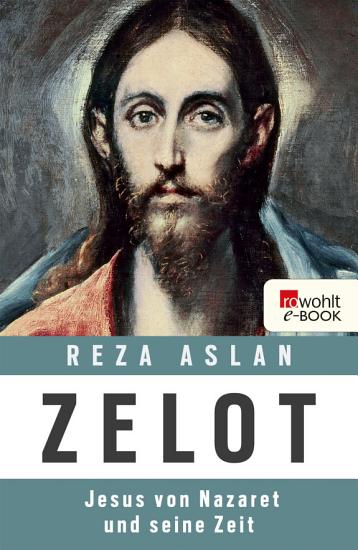 Book Description: THIS BOOK CONTAINS 4 BOOKS & IT'S A 4IN1 BOOK.1ST BOOK IS(THE QURAN THE BIBLE AND SCIENCE)2ND BOOK IS(THE TRUTH ABOUT MUHAMMAD AND JESUS)3rd BOOK IS (The quran the final evidence they don't want you to know)& 4TH BOOK IS(THE QUR'AAN AND MODERN SCIENCE COMPATIBLE OR INCOMPATIBLE?)THIS BOOK IS AVAILABLE ON WWW.AMAZON.COM The Bible,the Quran and Science The Holy Scriptures Examined in the Light of Modern Knowledge is an objective study of the Old Testament,the Gospels and the Qur'an.This book seeks to spiritually unite by highlighting similarities in the texts.It sheds new light and dispels many preconceived ideas in separating what belongs to Revelation from what is the product of error or human interpretation.INFORMATION ARRANGED & ORGANIZED BY MR.FAISAL FAHIM(The Quran the final evidence they don't want you to know):Top 10 Information you can learn in this book & why it's a must read book of knowledge for all:1.God definitions of various religions.2.What does Islam say about terrorism?3.women in various religions.4.Is evolution proven by logic & science?5.what does science say of Quran,Bible & Torah 6.The similarities & differences of world's major religions.7.Discoveries of scientific miracles in a scripture.8.Both science with religion& science vs religion.9.Moses, Jesus & Mohammad in Islam & Christianity.10.A documentary book on Islam, Christianity,Judaism,Hadiths&science.A RESEARCH PROJECT & A DOCUMENTARY BOOK ON SCIENCE & WORLD RELIGIONS&COMPARATIVE INTERFAITH DISCUSSIONS(The Qur'an & Modern Science: Compatible or Incompatible?)Ever since the dawn of human life on this planet,Man has always sought to understand Nature,his own place in the scheme of Creation and the purpose of Life itself. In this quest for Truth, spanning many centuries and diverse civilizations, organized religion has shaped human life and determined to a large extent, the course of history. While some religions have been based on books, claimed by their adherents to be divinely inspired, others have relied solely on human experience. Al-Qur'an, the main source of the Islamic faith, is a book believed by Muslims, to be of completely Divine origin. Muslims also believe that it contains Divine guidance for all humankind. Since the message of the Qur'an is believed to be for all times, it should be relevant to every age. Does the Qur'an pass this test? In this booklet, I intend to give an objective analysis of the Muslim belief regarding the Divine origin of the Qur'an, in the light of established scientific discoveries. There was a time, in the history of world civilization, when 'miracles', or what was perceived to be a miracle, took precedence over human reason and logic. But how do we define the term 'miracle'? A miracle is anything that takes place out of the normal course of life and for which humankind has no explanation. However, we must be careful before we accept something as a miracle. An article in `The Times of India', Mumbai, in 1993 reported that 'a saint' by the name 'Baba Pilot' claimed to have stayed continuously submerged under water in a tank for three consecutive days and nights. However, when reporters wanted to examine the base of the tank of water where he claimed to have performed this 'miraculous' feat, he refused to let them do so. He argued by asking as to how one could examine the womb of a mother that gives birth to a child. The `Baba' was hiding something. It as a gimmick simply to gain publicity.(THE TRUTH ABOUT MUHAMMAD AND JESUS)Top 10 information you can learn in this book & why this is a must read book for all 1. Biography of Muhammad by a non Muslim.2. Biography of Muhammad by a Muslim.3. What do non Muslim scholars say about Muhammad.4. Complete valid information about Jesus.5. Proven facts about the great Jesus.6. A research project on Abrahamic religions.7. Moses, Jesus & Muhammad in Islam & Christianity.8. Similarities & differences of Jesus & Muhammad. 9. Proof that Jesus existed.10. Proof that Muhammad existed. 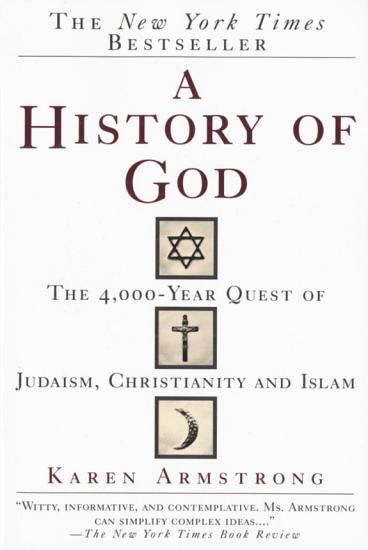 Book Description: The 4,000-year quest of Judaism, Christianity and Islam.