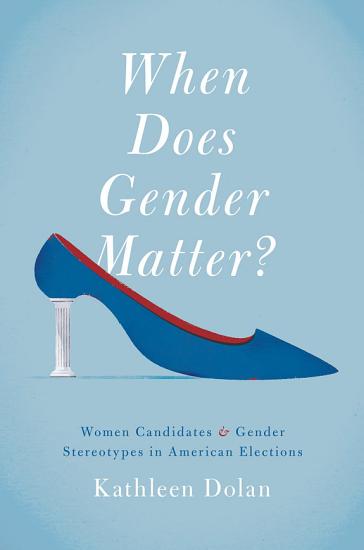 Book Description: "As the number of women candidates for office in the U.S. increases each election cycle, scholars are confronted with questions about the impact of their sex on their chances of success. Chief among these questions involves the influence of gender stereotypes on the decisions voters make in elections in which women run against men. Previous research documents that voters see women and men as possessing different character traits and different abilities to handle policy issues. These findings, combined with anecdotal evidence of sexist attitudes toward women candidates, raises concerns that women candidates are hampered by their sex and gender considerations. Employing data from an original survey of 3150 U.S. adults conducted in 2010, this book confronts scholarly concerns that gender stereotypes work to undermine women's chances of success. Challenging the conventional wisdom, these data demonstrate that voters do not rely heavily on gender stereotypes when evaluating and voting for women candidates. Voters do hold gendered attitudes, both positive and negative, about women candidates, but these attitudes are not related to the political decisions voters make. Instead, in deciding for whom to vote, people are influenced by traditional political forces, like political party and incumbency, regardless of the sex of the candidates. There is also evidence that partisan stereotypes interact with gender stereotypes to influence reactions to candidates, both women and men, depending on their political party. In the end, this project demonstrates that women candidates win as often as do men and that partisan concerns trump gender every time"-- 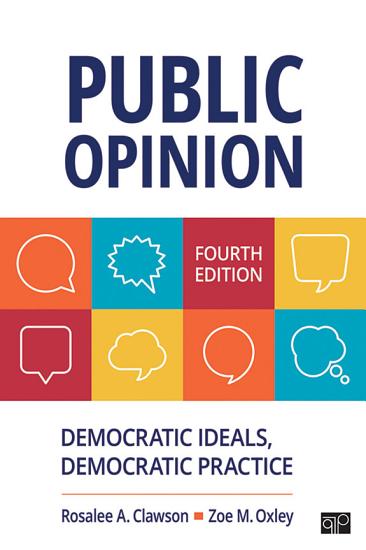 Book Description: In Public Opinion: Democratic Ideals, Democratic Practice, Fourth Edition, Clawson and Oxley link the enduring normative questions of democratic theory to existing empirical research on public opinion. Organized around a series of questions—In a democratic society, what should be the relationship between citizens and their government? Are citizens’ opinions pliable? Are they knowledgeable, attentive, and informed?—the text explores the tension between ideals and their practice. Each chapter focuses on exemplary studies, explaining not only the conclusion of the research, but how it was conducted, so students gain a richer understanding of the research process and see methods applied in context. 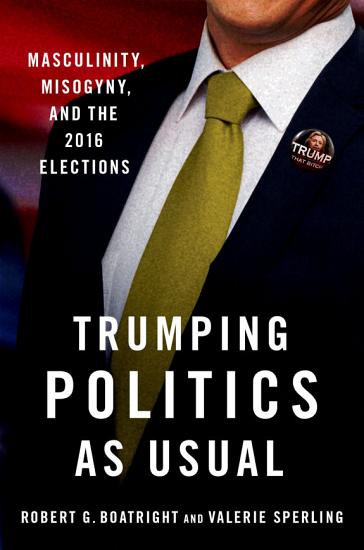 Book Description: In many elections, candidates frame their appeals in gendered ways--they compete, for instance, over who is more "masculine." This is the case for male and female candidates alike. In the 2016 presidential election, however, the stark choice between the first major-party female candidate and a man who exhibited a persistent pattern of misogyny made the use of gender more prominent than in any previous election in the United States. Presidential campaigns often have an impact on downballot Congressional races, but the 2016 election provided a new opportunity to see the effects of misogyny. While much has been written about the 2016 election--and the shadow of 2016 clearly affected the pool of candidates in the 2018 midterms--this book looks at how the Trump and Clinton campaigns actually changed the behavior of more conventional candidates for Congress in 2016 and 2018. Over the past decade, those who study political parties have sought to understand changes in the relationship between groups and parties and how these changes have affected the ability of parties to develop coherent campaign strategies. The clear need for rapid adjustments in party strategy in the 2016 election provides an ideal means of testing whether today's political parties are more able or less able to respond to unexpected events. This book argues that Donald Trump's candidacy radically altered the nature of the 2016 congressional campaigns in two ways. First, it changed the issues of contention in many of these races. Trump's provocative calls for building a wall along the Mexican border and temporarily prohibiting immigration from Muslim countries inserted issues of race and ethnicity into elections and forced candidates to respond to his proposals. Most consequentially, however, Trump's attacks on women--including television personalities, politicians, and, at times, private citizens--alienated numerous potential supporters and placed many of his supporters (and downballot Republican candidates in particular) on the defensive. Second, expectations that Trump would lose the election influenced how candidates for lower office campaigned and how willing they were to connect their fortunes to those of their party's nominee. The fact that Trump was expected to lose--and was expected to lose in large part because of his misogyny--caused both major parties to direct more of their resources toward congressional races, and led many Republican candidates, especially women, to distance themselves from Trump. This book explores how the Trump and Clinton campaigns used gender as a political weapon, and how the presidential race changed the ways in which House and Senate campaigns were waged in 2016 and 2018. 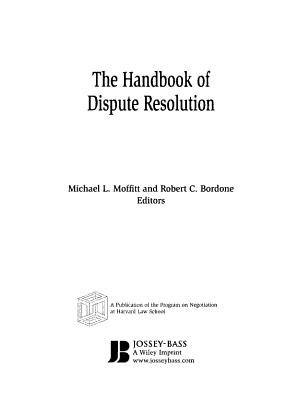 Book Description: " The book looks closely at the structure of disputes and dispute contexts, offers advice for creating value in disputes, using agents, and explores settlement through tools such as decision analysis... "-- BOOK JACKET. 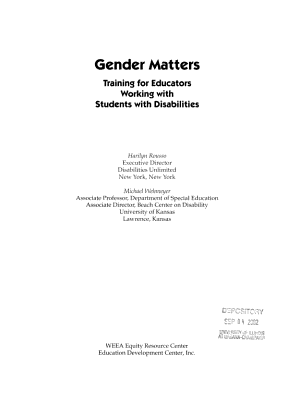 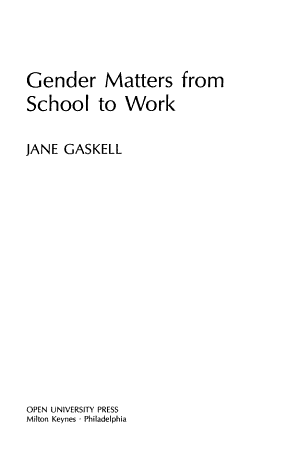 Book Description: Gaskell (social and educational studies, U. of British Columbia) explores the way young men and women experience and account for the relations between school and work, and analyzes the way schooling and work have been organized by historical and continuing patterns of gender and class inequality. Distributed by Taylor and Francis. Annotation copyrighted by Book News, Inc., Portland, OR 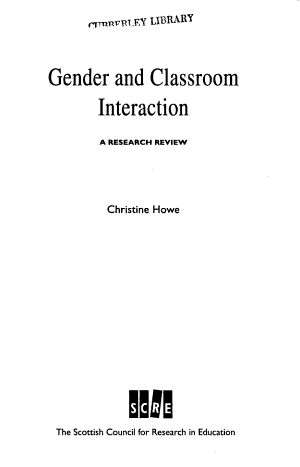 Book Description: This book evolved from a report, commissioned by the Scottish Office Education and Industry Department, which examined gender differences in classroom interaction. The book examines existing research and makes proposals for further action on the topic of whether social interaction in schools perpetuates behavioral differences between males and females. Starting from how classroom interaction might, in theory, result in discrimination, the author provides a review of the evidence, organized around interactive settings which cut across subject areas and school sectors. Chapters on whole-class discussion, desk-based group work, group work around computers, and discussion for oral assessment are followed by a synthesis of findings and discussion of the implications for further research and educational intervention. There are six chapters in the book. Contains 93 references. (EH) 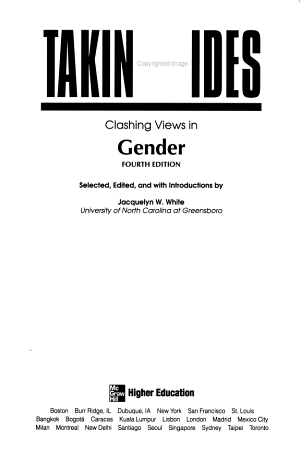 Book Description: This debate-style reader is designed to introduce students to controversies in gender studies. The readings, which represent the arguments of leading psychologists and other social commentators, reflect a variety of viewpoints and have been selected for their liveliness and substance and because of their value in a debate framework. Students will be exposed to a rich, exciting, and emotionally and politically charged body of theory, research, and practice. TAKING SIDES: GENDER, containing 20 issues organized into six parts, presents hotly debated issues in contemporary scholarly and public discourse. Students will actively develop critical thinking skills by analyzing opposing viewpoints and reach considered judgments. The issues will challenge students to consider what is sex, what is gender, and when is either relevant, and why. They will discover that what might appear to be binary, biologically based distinction is so much more. An Instructor’s Resource Guide (available online only) accompanies the book. For each issue, the following have been provided: a synopsis of each author’s position on the issue, teaching suggestions, and multiple-choice and essay questions. The teaching hints consist of suggestions for generating class discussion around the themes raised by the clashing essays. 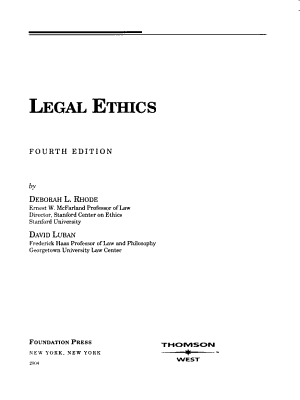