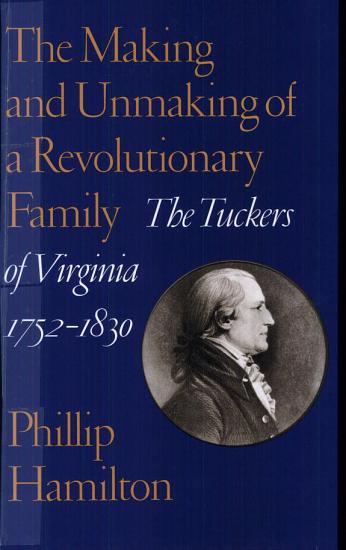 Book Description: In mid-April 1814, the Virginia congressman John Randolph of Roanoke had reason to brood over his family's decline since the American Revolution. The once-sumptuous world of the Virginia gentry was vanishing, its kinship ties crumbling along with its mansions, crushed by democratic leveling at home and a strong federal government in Washington, D.C. Looking back in an effort to grasp the changes around him, Randolph fixated on his stepfather and onetime guardian, St. George Tucker. The son of a wealthy Bermuda merchant, Tucker had studied law at the College of William and Mary, married well, and smuggled weapons and fought in the Virginia militia during the Revolution. Quickly grasping the significant changes--political democratization, market change, and westward expansion--that the War for Independence had brought, changes that undermined the power of the gentry, Tucker took the atypical step of selling his plantations and urging his children to pursue careers in learned professions such as law. Tucker's stepson John Randolph bitterly disagreed, precipitating a painful break between the two men that illuminates the transformations that swept Virginia in the late eighteenth and early nineteenth centuries. Drawing upon an extraordinary archive of private letters, journals, and other manuscript materials, Phillip Hamilton illustrates how two generations of a colorful and influential family adapted to social upheaval. He finds that the Tuckers eventually rejected wider family connections and turned instead to nuclear kin. They also abandoned the liberal principles and enlightened rationalism of the Revolution for a romanticism girded by deep social conservatism. The Making and Unmaking of a Revolutionary Family reveals the complex process by which the world of Washington and Jefferson evolved into the antebellum society of Edmund Ruffin and Thomas Dew. 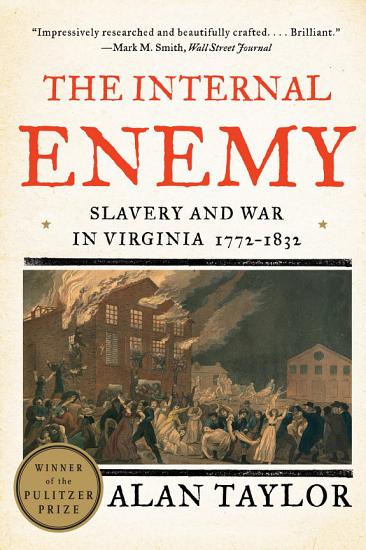 Book Description: Winner of the 2014 Pulitzer Prize for History "Impressively researched and beautifully crafted…a brilliant account of slavery in Virginia during and after the Revolution." —Mark M. Smith, Wall Street Journal Frederick Douglass recalled that slaves living along Chesapeake Bay longingly viewed sailing ships as "freedom’s swift-winged angels." In 1813 those angels appeared in the bay as British warships coming to punish the Americans for declaring war on the empire. Over many nights, hundreds of slaves paddled out to the warships seeking protection for their families from the ravages of slavery. The runaways pressured the British admirals into becoming liberators. As guides, pilots, sailors, and marines, the former slaves used their intimate knowledge of the countryside to transform the war. They enabled the British to escalate their onshore attacks and to capture and burn Washington, D.C. Tidewater masters had long dreaded their slaves as "an internal enemy." By mobilizing that enemy, the war ignited the deepest fears of Chesapeake slaveholders. It also alienated Virginians from a national government that had neglected their defense. Instead they turned south, their interests aligning more and more with their section. In 1820 Thomas Jefferson observed of sectionalism: "Like a firebell in the night [it] awakened and filled me with terror. I considered it at once the knell of the union." The notes of alarm in Jefferson's comment speak of the fear aroused by the recent crisis over slavery in his home state. His vision of a cataclysm to come proved prescient. Jefferson's startling observation registered a turn in the nation’s course, a pivot from the national purpose of the founding toward the threat of disunion. Drawn from new sources, Alan Taylor's riveting narrative re-creates the events that inspired black Virginians, haunted slaveholders, and set the nation on a new and dangerous course. 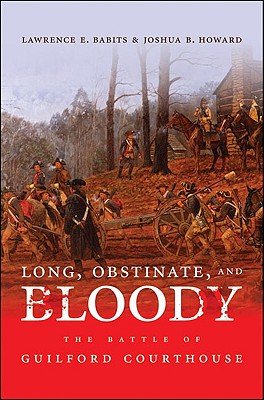 Book Description: Argues that, although the British won the Battle of Guilford Courthouse, the losses they sustained were significant enough to force a withdrawal from the state, and were an important factor in their final defeat at Yorktown, which ended the American Revolution. 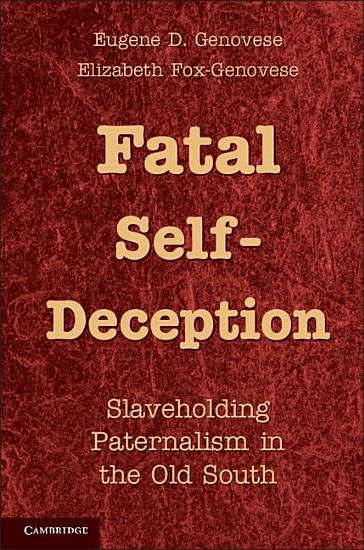 Book Description: Slaveholders were preoccupied with presenting slavery as a benign, paternalistic institution in which the planter took care of his family and slaves were content with their fate. In this book, Eugene D. Genovese and Elizabeth Fox-Genovese discuss how slaveholders perpetuated and rationalized this romanticized version of life on the plantation. Slaveholders' paternalism had little to do with ostensible benevolence, kindness and good cheer. It grew out of the necessity to discipline and morally justify a system of exploitation. At the same time, this book also advocates the examination of masters' relations with white plantation laborers and servants - a largely unstudied subject. Southerners drew on the work of British and European socialists to conclude that all labor, white and black, suffered de facto slavery, and they championed the South's 'Christian slavery' as the most humane and compassionate of social systems, ancient and modern. 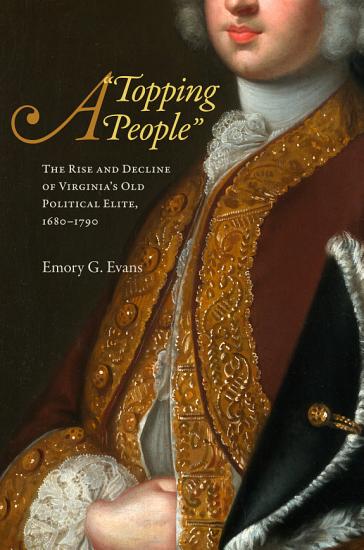 Book Description: A "Topping People" is the first comprehensive study of the political, economic, and social elite of colonial Virginia. Evans studies twenty-one leading families from their rise to power in the late 1600s to their downfall over one hundred years later. These families represented the upper echelons of power, serving in the upper and lower houses of the General Assembly, often as speaker of the House of Burgesses. Their names—Randolph, Robinson, Byrd, Carter, Corbin, Custis, Nelson, and Page, to note but a few—are still familiar in the Old Dominion some three hundred years later. Their decline was due to a variety of factors—economic, social, and demographic. The third generations showed an inability to adapt their business philosophies to the changing economic climate. Their inclination was to mirror the English landed gentry, living off the income of their landed estates. Economic diversification was the norm early on, but it became less effective after 1730. Scots traders, for example, introduced chain stores, making it more difficult to continue family-run stores. And land speculation was no substitute for diversification. An increase in population resulted in the creation of new counties, which weakened the influence of the Tidewater region. These leading families began to spend more than they earned and became heavily indebted to British mercantile firms. The Revolution only served to make matters worse, and by 1790 these families had lost their political and economic status, although their social status remained. A "Topping People" is a thorough and engrossing study of the way families came to gain and, eventually, lose great power in this turbulent and progressive period in American history. 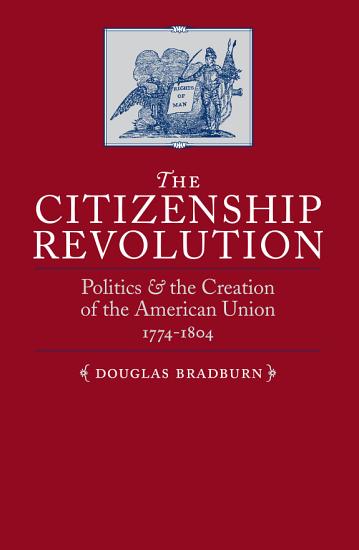 Book Description: Most Americans believe that the ratification of the Constitution in 1788 marked the settlement of post-Revolutionary disputes over the meanings of rights, democracy, and sovereignty in the new nation. In The Citizenship Revolution, Douglas Bradburn undercuts this view by showing that the Union, not the Nation, was the most important product of independence. In 1774, everyone in British North America was a subject of King George and Parliament. In 1776 a number of newly independent "states," composed of "American citizens" began cobbling together a Union to fight their former fellow countrymen. But who was an American? What did it mean to be a "citizen" and not a "subject"? And why did it matter? Bradburn’s stunning reinterpretation requires us to rethink the traditional chronologies and stories of the American Revolutionary experience. He places battles over the meaning of "citizenship" in law and in politics at the center of the narrative. He shows that the new political community ultimately discovered that it was not really a "Nation," but a "Union of States"—and that it was the states that set the boundaries of belonging and the very character of rights, for citizens and everyone else. To those inclined to believe that the ratification of the Constitution assured the importance of national authority and law in the lives of American people, the emphasis on the significance and power of the states as the arbiter of American rights and the character of nationhood may seem strange. But, as Bradburn argues, state control of the ultimate meaning of American citizenship represented the first stable outcome of the crisis of authority, allegiance, and identity that had exploded in the American Revolution—a political settlement delicately reached in the first years of the nineteenth century. So ended the first great phase of the American citizenship revolution: a continuing struggle to reconcile the promise of revolutionary equality with the pressing and sometimes competing demands of law, order, and the pursuit of happiness. 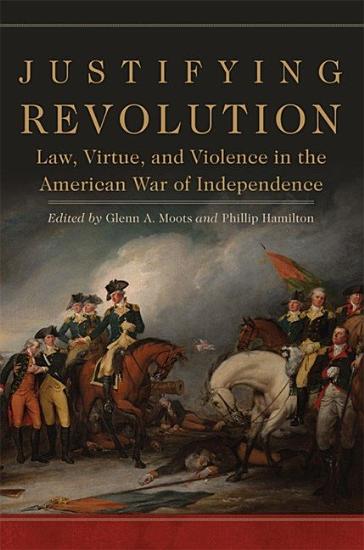 Book Description: The American imagination still exalts the Founders as the prime movers of the Revolution, and the War of Independence has become the stuff of legend. But America is not simply the invention of great men or the outcome of an inevitable political or social movement. The nation was the result of a hard, bloody, and destructive war. Justifying Revolution explores how the American Revolution’s opposing sides wrestled with thorny moral and legal questions. How could revolutionaries justify provoking a civil war, how should their opponents subdue the uprising, and how did military commanders restrain the ensuing violence? Drawing from a variety of disciplines and specialties, the authors assembled here examine the Revolutionary War in terms of just war theory: jus ad bellum, jus in bello, and jus post bellum—right or justice in going to, conducting, and concluding war. The chapters situate the Revolution in the context of early modern international relations, moral philosophy, military ethics, jurisprudence, and theology. The authors invite readers to reconsider the war with an eye to the justice and legality of entering armed conflict; the choices made by officers and soldiers in combat; and attempts to arrive at defensible terms of peace. Together, the contributions form the first sustained exploration of Americans’ and Britons’ use of just war theory as they battled over American independence. Justifying Revolution raises important questions about the political, legal, military, religious, philosophical, and diplomatic ramifications of eighteenth-century warfare—questions essential for understanding America’s origins. 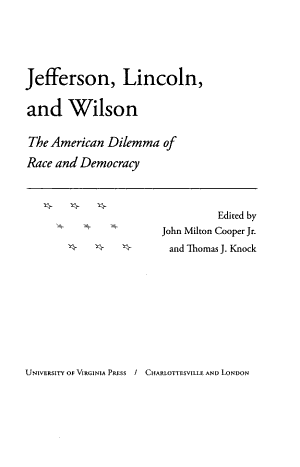 Book Description: world, even as they violated principles for which they ostensibly stood. -- 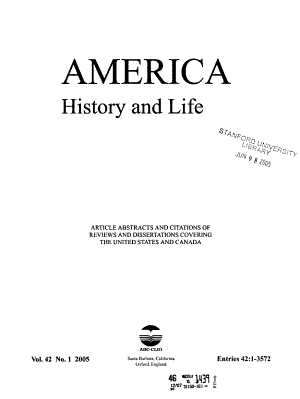