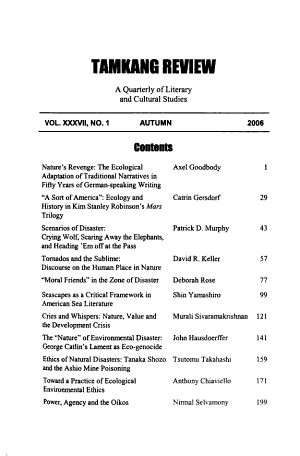 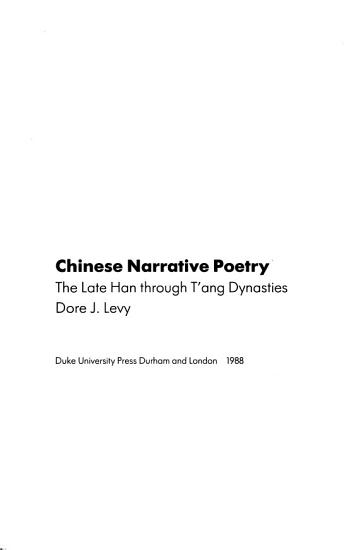 Book Description: Chinese Narrative Poetry brings a new perspective to some of China's best-loved and most influential poems, including Ts'ai Yen's "Poem of Affliction," Po Chu-yi's "Song of Everlasting Sorrow," and Wei Chuang's recently discovered "Song of the Lady of Ch'in." Composed in the shih form during the Late Han, Six Dynasties, and T'ang periods, these poems stand out as masterworks of narrative art. Yet paradoxically, their narrative qualities have been little recognized or explored in either traditional Chinese or modern Western scholarship. The reason for this neglect is that Western literary traditions acknowledge their origins in epic poetry and thus take narrative for granted, but the Chinese tradition is fundametally based on lyric and does not admit of a separate category for narrative poetry. Drawing on both classical Chinese critical works and the most recent Western contributions to the theory of narrative, Levy shows how narrative elements developed out of the lyrical conventions of shih. In doing so, she accomplishes a double purpose, guiding the modern reader to an understanding of the nature of narrative in Chinese poetry and shedding light on the ways in which Chinese poets adapted the devises of lyric to the needs of a completely different expressive mode. Students of Chinese literature will welcome this pathbreaking study, but Chinese Narrative Poetry will interest other scholars as well because it addresses questions of crucial importance for literary theory and comparative literature, particularly the central issue of the applicability of Western critical concepts to non-Western literature and culture. 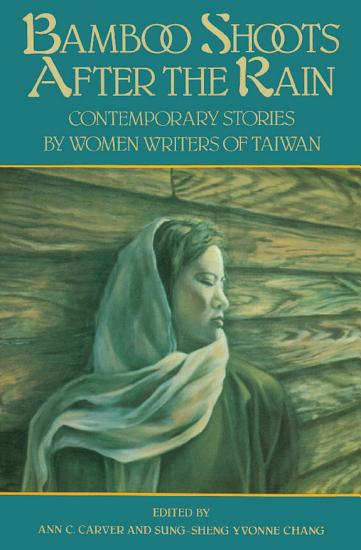 Book Description: This remarkable anthology introduces the short fiction of fourteen writers, major figures in the literary movements of three generations, who represent a range of class, ethnic, age, and political perspectives.It is filled with "unexpected gems", writes Scarlet Cheng in Belles Lettres, including Lin Hai-yin's story of a woman suffering under a feudal system that dominated Old China; Chiang Hsiao-yun's optimistic solutions to problems of the elderly in the rapidly changing Taiwan of the 1980; and in between, a dozen richly diverse stories of aristocrats, comrades, wices, concubines, children, mothers, sexuality, rape, female initiation, and the tensions between traditional and modern life. "This is not western feminism with an Asian accent", says Bloomsbury Review, "but a description of one culture's reality... The woman protagonists survive both despite and because of their existence in a changing Taiwan." This book includes biographical headnotes, an introduction that addresses the literary movements represented, and an extensive bibliography. 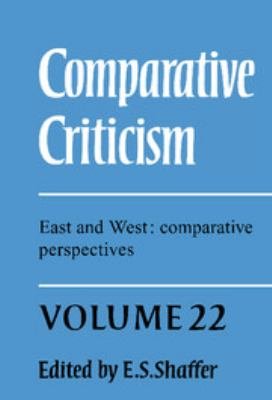 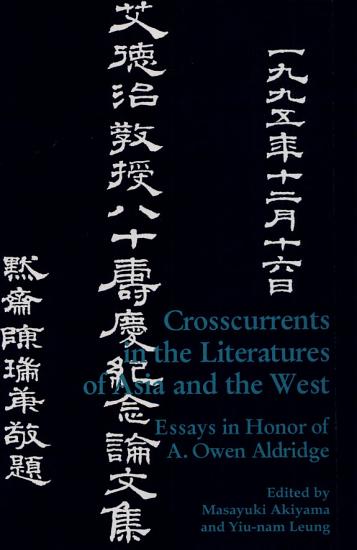 Book Description: The essays in this volume provide a straightforward approach to East-West literary relationships, in contrast to the marginalized and Eurocentric perspectives that still dominate mainstream comparative literature. 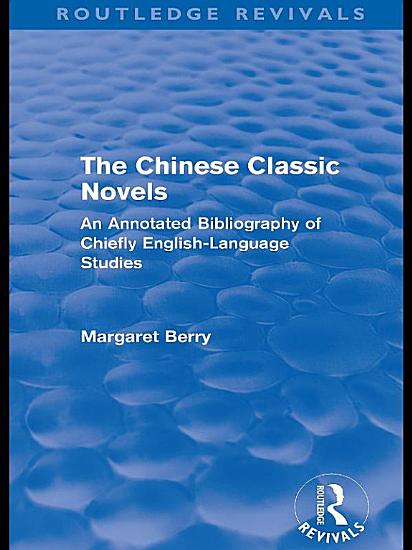 Book Description: First published in 1988, this reissue is an important work in the field of national literary exchange. Declared by American Library Association in its Choice publication one of the ten best reference works of 1988, the volume has survived global change - politically, socially, economically, religiously, aesthetically - to promote cultural dialogue between China and the West. Besides the scores of annotated sources, the introductory essays remain as authentic and moving as the day of their appearance. 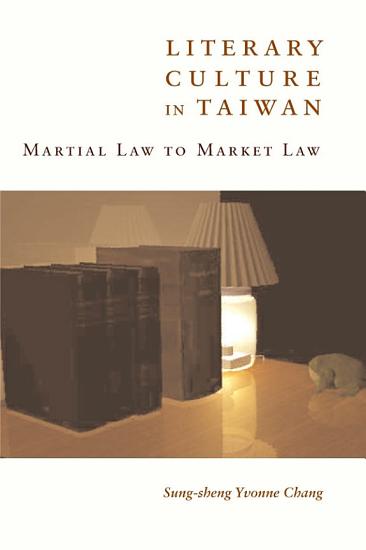 Book Description: With monumental changes in the last two decades, Taiwan is making itself anew. The process requires remapping not only the country's recent political past, but also its literary past. Taiwanese literature is now compelled to negotiate a path between residual high culture aspirations and the emergent reality of market domination in a relatively autonomous, increasingly professionalized field. This book argues that the concept of a field of cultural production is essential to accounting for the ways in which writers and editors respond to political and economic forces. It traces the formation of dominant concepts of literature, competing literary trends, and how these ideas have met political and market challenges. Contemporary Taiwanese literature has often been neglected and misrepresented by literary historians both inside and outside of Taiwan. Chang provides a comprehensive and fluent history of late twentieth-century Taiwanese literature by placing this vibrant tradition within the contexts of a modernizing local economy, a globalizing world economy, and a postcolonial and post-Cold War world order. 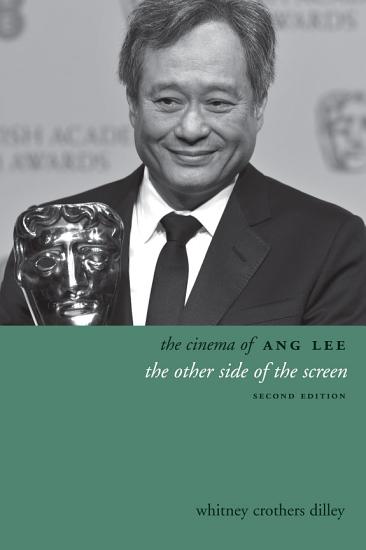 Book Description: Born in Taiwan, Ang Lee is one of cinema's most versatile and daring directors. His ability to cut across cultural, national, and sexual boundaries has given him recognition in all corners of the world, the ability to work with complete artistic freedom whether inside or outside of Hollywood, and two Academy Awards for Best Director. He has won astounding critical acclaim for Crouching Tiger, Hidden Dragon (2000), which transformed the status of martial arts films across the globe, Brokeback Mountain (2005), which challenged the reception and presentation of homosexuality in mainstream cinema, and Life of Pi (2012), Lee's first use of groundbreaking 3D technology and his first foray into complex spiritual themes. In this volume, the only full-length study of Lee's work, Whitney Crothers Dilley analyzes all of his career to date: Lee's early Chinese trilogy films (including The Wedding Banquet, 1993, and Eat Drink Man Woman, 1994), period drama (Sense and Sensibility, 1995), martial arts (Crouching Tiger, Hidden Dragon, 2000), blockbusters (Hulk, 2003), and intimate portraits of wartime psychology, from the Confederate side of the Civil War (Ride with the Devil, 1999) to Japanese-occupied Shanghai (Lust/Caution, 2007). Dilley examines Lee's favored themes such as father/son relationships and intergenerational conflict in The Ice Storm (1997) and Taking Woodstock (2009). By looking at the beginnings of Lee's career, Dilley positions the filmmaker's work within the roots of the Taiwan New Cinema movement, as well as the larger context of world cinema. Using suggestive readings of both gender and identity, this new study not only provides a valuable academic resource but also an enjoyable read that uncovers the enormous appeal of this acclaimed director. 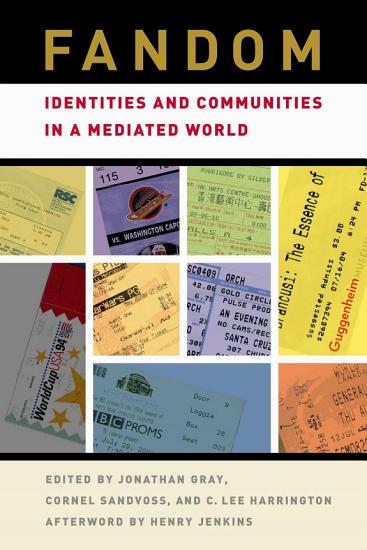 Book Description: We are all fans. Whether we log on to Web sites to scrutinize the latest plot turns in Lost, “stalk” our favorite celebrities on Gawker, attend gaming conventions, or simply wait with bated breath for the newest Harry Potter novel—each of us is a fan. Fandom extends beyond television and film to literature, opera, sports, and pop music, and encompasses both high and low culture. Fandom brings together leading scholars to examine fans, their practices, and their favorite texts. This unparalleled selection of original essays examines instances across the spectrum of modern cultural consumption from Karl Marx to Paris Hilton, Buffy the Vampire Slayer to backyard wrestling, Bach fugues to Bollywood cinema ̧ and nineteenth-century concert halls to computer gaming. Contributors examine fans of high cultural texts and genres, the spaces of fandom, fandom around the globe, the impact of new technologies on fandom, and the legal and historical contexts of fan activity. Fandom is key to understanding modern life in our increasingly mediated and globalized world. 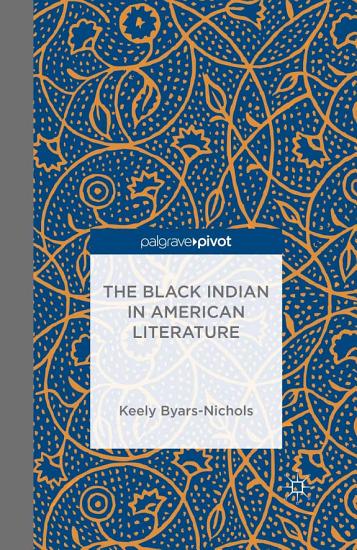 Book Description: The first book-length study of the figure of the black Indian in American Literature, this project explores themes of nation, culture, and performativity. Moving from the Post-Independence period to the Contemporary era, Byars-Nichols re-centers a marginalized group challenges stereotypes and conventional ways of thinking about race and culture.