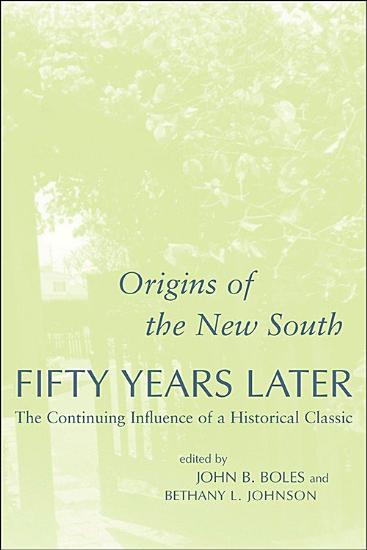 Book Description: In this thoughtful, sophisticated book, John B. Boles and Bethany L. Johnson piece together the intricate story of historian C. Vann Woodward’s 1951 masterpiece, Origins of the New South, 1877–1913, published as Volume IX of LSU Press’s venerable series A History of the South. Sixteen reviews and articles by prominent southern historians of the past fifty years here offer close consideration of the creation, reception, and enduring influence of that classic work of history. It is rare for an academic book to dominate its field half a century later as Woodward’s Origins does southern history. Although its explanations are not accepted by all, the volume remains the starting point for every work examining the South in the era between Reconstruction and World War I. In writing Origins, Woodward deliberately set out to subvert much of the historical orthodoxy he had been taught during the 1930s, and he expected to be lambasted. But the revisionist movement was already afoot among white southern historians by 1951 and the book was hailed. Woodward’s work had an enormous interpretative impact on the historical academy and encapsulated the new trend of historiography of the American South, an approach that guided both black and white scholars through the civil rights movement and beyond. This easily accessible collection comprises four reviews of Origins from 1952 to 1978; “Origin of Origins,” a chapter from Woodward’s 1986 book Thinking Back: The Perils of Writing History that explains and reconsiders the context in which Origins was written; five articles from a fiftieth anniversary retrospective symposium on Origins; and three commentaries presented at the symposium and here published for the first time. A combination of trenchant commentary and recent reflections on Woodward’s seminal study along with insight into Woodward as a teacher and scholar, Fifty Years Later in effect traces the creation and development of the modern field of southern history. 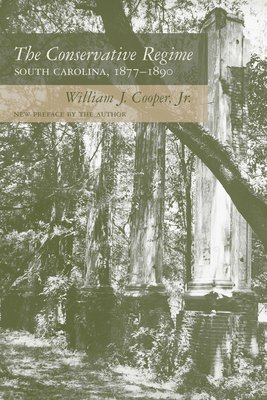 Book Description: First published in 1968, The Conservative Regime: South Carolina, 1877-1890 remains one of the most often cited texts on the era. In the study that inaugurated his distinguished career, William J. Cooper, Jr., addresses two divergent political eras and the powerful figures who shaped them as South Carolina redefined itself in the wake of the Civil War and Reconstruction. 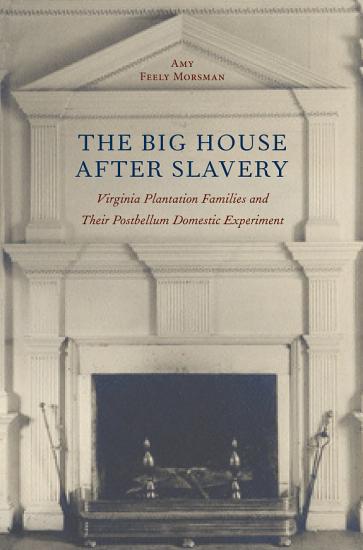 Book Description: The Big House after Slavery examines the economic, social, and political challenges that Virginia planter families faced following Confederate defeat and emancipation. Amy Feely Morsman addresses how men and women of the planter class responded to postwar problems and how their adaptations to life without slavery altered their marital relationships and their conceptions of gender roles. Unable to afford many servants in the new free labor economy, many of Virginia’s former masters put themselves to work on their plantations, and their wives had to expand their responsibilities as well, taking on the tasks of cooking and cleaning in addition to working in the garden, the henhouse, and the dairy. Laboring in these ways and struggling to maintain their standing as elites contributed to an identity crisis among Virginia planters. It also led them to practice mutuality within their own marriages and to reconsider what proper Southern womanhood and manhood meant in the new postwar order. Using newspapers, periodicals, organization records, and numerous letters from Virginia plantation families, Morsman captures how these frustrated elites made sense of embarrassing postwar changes, in the private but also in the public spheres they inhabited. Morsman suggests that the planters’ adaptations may have been carried forward by their adult children away from the crumbling plantations and into the urban households of the New South. 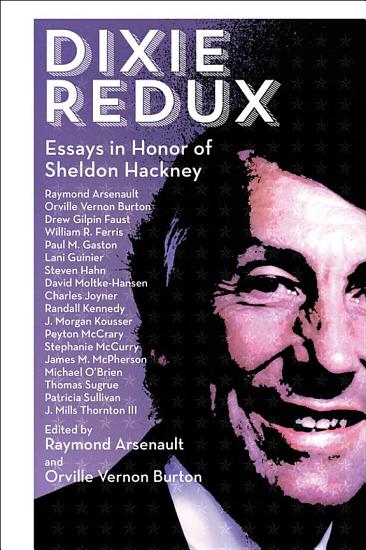 Book Description: Dixie Redux: Essays in Honor of Sheldon Hackney is a collection of original essays written by some of the nation’s most distinguished historians. Each of the contributors has a personal as well as a professional connection to Sheldon Hackney, a distinguished scholar in his own right who has served as Provost of Princeton University, president of Tulane University and the University of Pennsylvania, and the chairman of the National Endowment for the Humanities. In a variety of roles–teacher, mentor, colleague, administrator, writer, and friend–Sheldon Hackney has been a source of wisdom, empowerment, and wise counsel during more than four decades of historical and educational achievement. His life, both inside and outside the academy, has focused on issues closely related to civil rights, social justice, and the vagaries of race, class, regional culture, and national identity. Each of the essays in this volume touches upon one or more of these important issues–themes that have animated Sheldon Hackney’s scholarly and professional life. 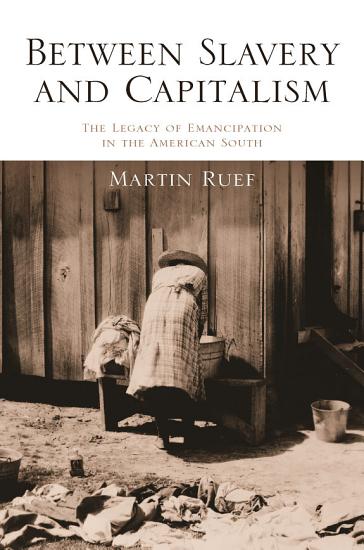 Book Description: An in-depth examination of the economic and social transition from slavery to capitalism during Reconstruction At the center of the upheavals brought by emancipation in the American South was the economic and social transition from slavery to modern capitalism. In Between Slavery and Capitalism, Martin Ruef examines how this institutional change affected individuals, organizations, and communities in the late nineteenth century, as blacks and whites alike learned to navigate the shoals between two different economic worlds. Analyzing trajectories among average Southerners, this is perhaps the most extensive sociological treatment of the transition from slavery since W.E.B. Du Bois's Black Reconstruction in America. In the aftermath of the Civil War, uncertainty was a pervasive feature of life in the South, affecting the economic behavior and social status of former slaves, Freedmen's Bureau agents, planters, merchants, and politicians, among others. Emancipation brought fundamental questions: How should emancipated slaves be reimbursed in wage contracts? What occupations and class positions would be open to blacks and whites? What forms of agricultural tenure could persist? And what paths to economic growth would be viable? To understand the escalating uncertainty of the postbellum era, Ruef draws on a wide range of qualitative and quantitative data, including several thousand interviews with former slaves, letters, labor contracts, memoirs, survey responses, census records, and credit reports. Through a resolutely comparative approach, Between Slavery and Capitalism identifies profound changes between the economic institutions of the Old and New South and sheds new light on how the legacy of emancipation continues to affect political discourse and race and class relations today. 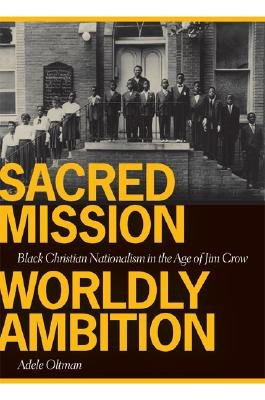 Book Description: Using Savannah, Georgia, as a case study, Sacred Mission, Worldly Ambition tells the story of the rise and decline of Black Christian Nationalism. This nationalism emerged from the experiences of segregation, as an intersection between the sacred world of religion and church and the secular world of business. The premise of Black Christian Nationalism was a belief in a dual understanding of redemption, at the same time earthly and otherworldly, and the conviction that black Christians, once delivered from psychic, spiritual, and material want, would release all of America from the suffering that prevented it from achieving its noble ideals. The study's use of local sources in Savannah, especially behind-the-scenes church records, provides a rare glimpse into church life and ritual, depicting scenes never before described. Blending history, ethnography, and Geertzian dramaturgy, it traces the evolution of black southern society from a communitarian, nationalist system of hierarchy, patriarchy, and interclass fellowship to an individualistic one that accompanied the appearance of a new black civil society. Although not a study of the civil rights movement, Sacred Mission, Worldly Ambition advances a bold, revisionist interpretation of black religion at the eve of the movement. It shows that the institutional primacy of the churches had to give way to a more diversified secular sphere before an overtly politicized struggle for freedom could take place. The unambiguously political movement of the 1950s and 1960s that drew on black Christianity and radiated from many black churches was possible only when the churches came to exert less control over members' quotidian lives. A Sarah Mills Hodge Fund Publication. 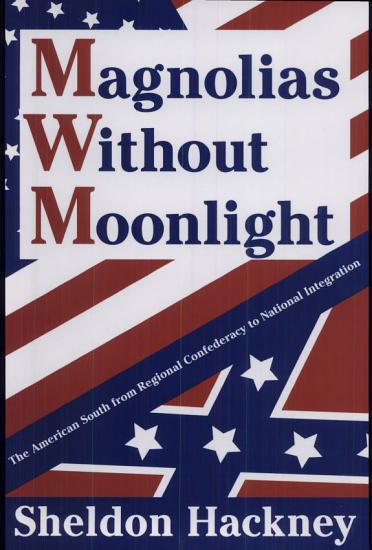 Book Description: Hackney uses quantitative analysis of homicide data to establish beyond doubt for the first time that the South has long been more violent, and that there is a cultural component of that violence that exists beyond the usual social predictors of higher homicide rates in the United States. He muses over the failure of the usual social predictors of votes for the Democratic Party to predict the party's performance in the region."--BOOK JACKET. 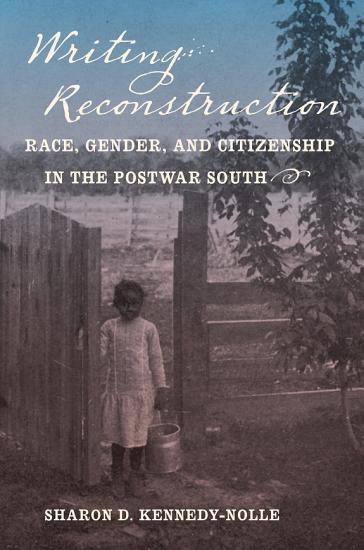 Book Description: After the Civil War, the South was divided into five military districts occupied by Union forces. Out of these regions, a remarkable group of writers emerged. Experiencing the long-lasting ramifications of Reconstruction firsthand, many of these writers sought to translate the era's promise into practice. In fiction, newspaper journalism, and other forms of literature, authors including George Washington Cable, Albion Tourgee, Constance Fenimore Woolson, and Octave Thanet imagined a new South in which freedpeople could prosper as citizens with agency. Radically re-envisioning the role of women in the home, workforce, and marketplace, these writers also made gender a vital concern of their work. Still, working from the South, the authors were often subject to the whims of a northern literary market. Their visions of citizenship depended on their readership's deference to conventional claims of duty, labor, reputation, and property ownership. The circumstances surrounding the production and circulation of their writing blunted the full impact of the period's literary imagination and fostered a drift into the stereotypical depictions and other strictures that marked the rise of Jim Crow. Sharon D. Kennedy-Nolle blends literary history with archival research to assess the significance of Reconstruction literature as a genre. Founded on witness and dream, the pathbreaking work of its writers made an enduring, if at times contradictory, contribution to American literature and history. 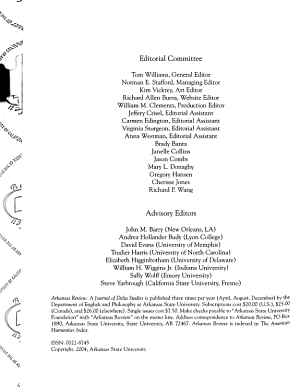 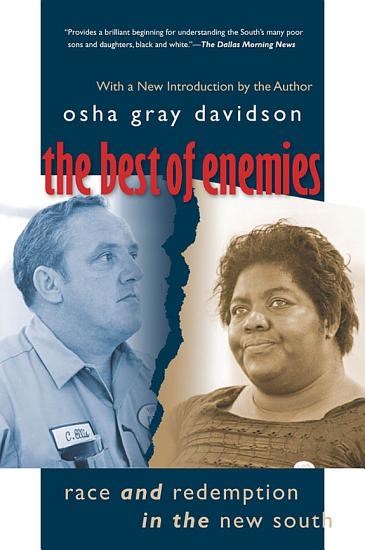 Book Description: C. P. Ellis grew up in the poor white section of Durham, North Carolina, and as a young man joined the Ku Klux Klan. Ann Atwater, a single mother from the poor black part of town, quit her job as a household domestic to join the civil rights fight. During the 1960s, as the country struggled with the explosive issue of race, Atwater and Ellis met on opposite sides of the public school integration issue. Their encounters were charged with hatred and suspicion. In an amazing set of transformations, however, each of them came to see how the other had been exploited by the South's rigid power structure, and they forged a friendship that flourished against a backdrop of unrelenting bigotry. Rich with details about the rhythms of daily life in the mid-twentieth-century South, The Best of Enemies offers a vivid portrait of a relationship that defied all odds. By placing this very personal story into broader context, Osha Gray Davidson demonstrates that race is intimately tied to issues of class, and that cooperation is possible--even in the most divisive situations--when people begin to listen to one another.